Footballers of the Windrush Generation

Members of the Windrush Generation have contributed so much to so many aspects of British Society, in few places is this more visible than on football pitches up and down the country.

There have been black players in British football from the start of the game as an organised professional sport. A mixed heritage player called Arthur Wharton made his debut in goal for Sheffield United in the League on 23rd February 1895, just seven years after the competition started in 1888.
There were 92 Football League clubs at the start of the 2019/20 season, 18 of them had fielded a black player before the outbreak of World War Two but, for a further 29, their first black player was a member of the Windrush Generation.

There were boxers on the Empire Windrush when it arrived at Tilbury on 22nd June 1948 but no professional footballers. However, some came later having been born in the Caribbean. One of them was Brendon Batson. Born in Grenada in 1953, he came to England with his parents as a nine year-old and went on to become the first black player in Arsenal’s 1st team in 1972. Roland Butcher, born in Barbados, was the first black footballer to play for Stevenage but is better known as England’s first black international cricketer.

More were born in the UK, the sons of parents who made the journey from the Caribbean in the 1950s or 1960s. Some achieved notable successes in their football career.

Laurie Cunningham, whose parents were from Jamaica, first played for Leyton Orient before transferring to West Bromwich Albion where, in 1977, he was the first black player to make it into its 1st eleven. Laurie subsequently moved to Spain where he won a European Cup winner’s medal with the mighty Real Madrid.

Others had long and successful careers for clubs in lower divisions. Tony Ford, Grimsby Town’s first black player, made 1081 League and Cup appearances over a career that spanned 26 seasons from 1975 to 2001. This remains the highest number of appearances for any outfield player (only goalkeeper, Peter Shilton, played more). Tony’s father was from Barbados, in the UK he met Bradford-born, Jean Ford and Tony was born in 1959.

Not all were as successful. Lloyd Maitland made only 39 appearances in the League for Huddersfield and a further 71 for Darlington before his career was brought to a premature end when he was run over by a car driven by one of his own team mates.

One thing they had in common was that they faced racist abuse of varying degrees of vitriol. Peter Foley, Scunthorpe’s first black player, once feigned injury to avoid playing at Millwall’s notorious ground. This was a seminal moment in Peter’s life as he vowed, he would never again hide from racism but would fight it with all his might – he was later awarded the MBE for his work to combat racism.But none of the Windrush Generation of football pioneers achieved more than Viv Anderson.

Viv’s father, Audley Anderson, sailed from Jamaica on board the SS Auriga. He left behind his young bride, Myrtle. Like so many men of the time he recognised the need to make sacrifices to achieve a better future for himself and his family. Audley arrived at Plymouth on 12th October 1954. Five months later, Myrtle followed him, also travelling on the Auriga to Plymouth. Myrtle was a qualified teacher but, as so many in her position found, her qualifications didn’t satisfy the UK authorities. She found a job as a school dinner lady but later qualified as a nurse, becoming one of the many thousands of nurses from the Caribbean who helped make the Health Service such a success.

The Andersons set up home in Nottingham and that is where Vivian Alexander Anderson was born on 29th July 1956. Viv went on to be a key part of the local team that won the First Division title (what would now be the Premiership) and the European Cup (forerunner of the Champions League) twice with Nottingham Forest. He was Forest’s first black player and, in 1978, also the first to win a full England cap.

Viv is included in a book, Football’s Black Pioneers, written by Bill Hern and David Gleave, and published later in 2020 the first black player at each of the 92 British League clubs. 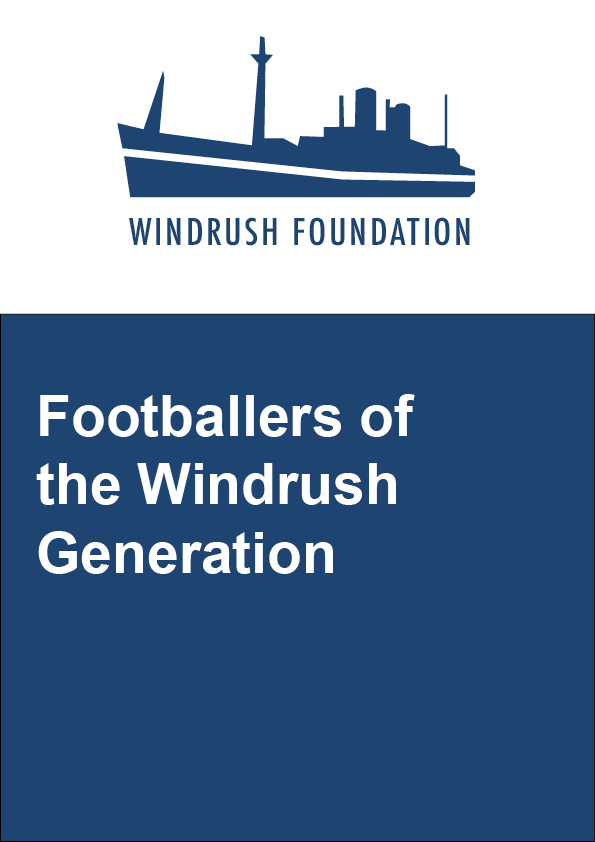