The Empire Windrush is associated with the arrival of Caribbean men, women and children in the UK from 22 June 1948 at Tilbury Docks, Essex. The ship became iconic and closely associated with ‘coloured immigration’ which was the label given by both Labour and Conservative Governments.

The Labour Government came to power soon after WWII and MPs continued to hinder the attempts of Caribbean people to settle in Britain. The colonial subjects were considered ‘coloureds’ and their presence in the country after 1945 was a cause for MP’s and public concerns.

Faced with a labour-shortage, estimated at 1,346,000 after WWII, it was the government’s intention to obtain ex-prisoners of war, Polish ex-servicemen, and eventually the European Voluntary Workers (EVW) scheme, as workers. The ‘Whites Only’ programme was racially discriminatory. Given the EVWs’ status as ‘aliens’, they could be directed to, and kept within, certain understaffed, and frequently undesirable, sectors of employment. This status clearly differentiated them from Caribbean migrants, who, as British citizens, were exempt from such controls.

Many thousands of Caribbean workers had contributed to the war effort either as volunteers in the armed forces or technicians, and while some remained, the majority were demobbed and returned to the colonies. After WWII ended on 8 May 1945, more than three thousand Caribbean men decided to remain in Britain. Windrush Foundation includes them among the early Windrush Generation, in terms of their goals and aspirations, which were no different from those who arrived on 22 June 1948. They were the ones who advised relatives and colleagues back home to move to the UK, even though life was not easy for them in the mother country. Arthur  Torrington has interviewed some who remained here and many who returned on 22 June 1948. One of thos was ‘Jimmy’ Leigh, an WWII RAF serviceman and a Windrush passenger, and he confirmed that his ex-RAF colleagues provided accommodation for him in West Bromwich, West Midlands, after he landed on 22 June 1948.

The Empire Windrush, which made a single journey to the Caribbean, was one of many British troopships that brought to the UK after WWII. There were 110, mainly ex-servicemen, on the SS Ormonde that arrived in May 1947, and over 200 on the SS Almanzora in December 1947. It was the Empire Windrush that raise alarm Whitehall bells because there were more than 1,020 passengers on board, and the Labour Government took action to dissuade others who were planning to move to the motherland. They sent government personnel to Jamaica and they were obliged to inform potential settlers that there were no jobs for them in Britain and life would not be pleasant. The personnel did so with the knowledge that there was a massive labour shortage in the UK and that the British Government did not prefer coloured workers, but those of European heritage. White Australian or Canadian would not have been rejected as they would have been received as ‘settlers.

The governments of other Caribbean colonies were also advised to dissuade intending travellers. There wasn’t a sharp rise in the number of Caribbean passengers on other troopships immediate after the Empire Windrush. The SS Orbita, on which poet James Berry travelled, arrive in Britain in the Autumn of 1948. There had been talks among some MPs of refusing the Empire Windrush permission to land at Tilbury Docks in June 1948. Within the Labour Cabinet, MPs were negative about the journey and the national media became aware of it.

“This country may become an open reception centre for immigrants not selected in respect to health, education, training, character, customs and above all, whether assimilation is possible or not.“

“The British people fortunately enjoy a profound unity without uniformity in their way of life, and are blest with the absence of a colour racial problem. An influx of coloured people domiciled here is likely to impair the harmony, strength and cohesion of our public and social life and to cause discord and unhappiness among all concerned.

In our opinion colonial governments are responsible for the welfare of their people and Britain is giving these governments great financial assistance to enable them to solve their population problems. We venture to suggest that the British Government should, like foreign countries, the dominions and even some of the colonies, by legislation if necessary, control immigration in the political, social, economic and fiscal interests of our people.

In our opinion such legislation or administrative action would be almost universally approved by our people.” (HO 213/244, J. Murray et al. to Prime Minister, 22 June 1948)

When the Conservative Government came to power in 1951, MPs increased the heat on ‘coloured immigration’.“ 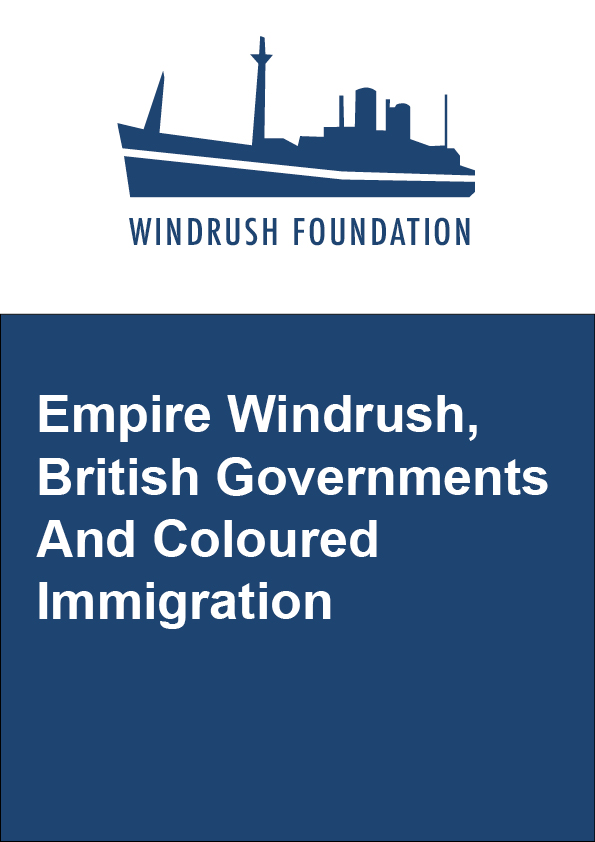