Rudolph (Nick) Collins was nearly 17 years old when his brother’s best friend told him about life in England, and Nick immediately decided to emigrate.

“As things would have it, there was an advert in the local paper saying that a ship was going to be coming to Jamaica and you could take the opportunity to book a passage to England for as little as £28.10s,” he remembered. His parents agreed that he could go, and they found the money for the journey on the ship Empire Windrush.

After disembarking at Tilbury Docks, Essex, and not having somewhere to live, he was taken to Clapham South Deep Shelter, South London. He was there for five days before finding a room to rent in Earls Court, Nick managed to find work at a factory that made confectionery, but the pay was £3 per week. Whilst working there he also tried to get a job as an apprentice draughtsman with several engineering companies but was rejected by all of them. He later obtained a job as a welder, having taken practical courses at a Technical College.

Dancing at the ‘Paramount’ in Tottenham Court Road was a regular haunt of ex-servicemen and other West Indians, and it was there he met a young English girl, whom he married in 1953. One of the things that always kept him going during those years was his love and enjoyment of playing cricket. The team played all over London and the Home Counties, and he was able to take his wife and three daughters to see him play. But, he had to give it all up in 1979 because of illness.

Nick will always be remembered as the young man in his pyjamas at Clapham South Deep Shelter. 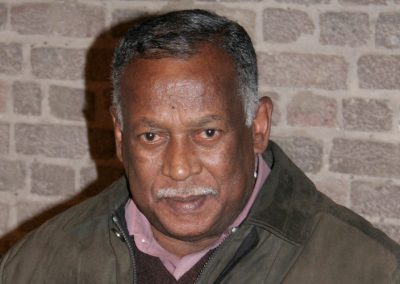