Laurent Phillpotts was born in Jamaica in 1923. He had been a trainee linotype operator at the Gleaner before volunteering for service in the Royal Air Force in 1943. After three months training at a camp on the island, he travelled to England where he received further military training. His role in the war was as a teleprinter operator, serving in Norfolk and Nottingham.

After the war ended in May 1945, Laurent (Laurie) remained in the RAF for a further two years. Having been demobbed, he attended Leeds Technical College to train as a linotype operator. As he did not want to return to Jamaica, he found a job, and was allowed to remain in the UK. In order to pursue his ambition of landing a job at one of the newspapers on Fleet Street, London, he moved to Welling City in the 1960s where he worked at the Welling Times. He eventually obtained employment with the Daily Mirror.

After the arrival of Windrush passengers in 1948, he helped some of them find work and housing in Nottingham. He helped establish the Nottingham Consultative Committee for the Welfare of Coloured People to negotiate with the corporate sector for work. The NCCWCP successfully lobbied for Black people to be employed in the Transport system in Nottingham. In 1956, he produced a weekly paper called ‘Colonial News’ to provide information about the West Indies and life in Nottingham. In retirement he assists in the management of West Indian Ex-Service Association in Lambeth, London. 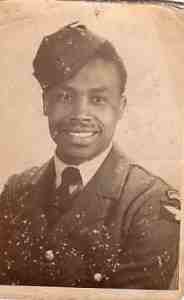