George was 15 years old when his ex-serviceman friend Barry returned home and told him about England. The stories fascinated him so much that he was keen to emigrate.

When Empire Windrush stopped at Kingston Harbour, Jamaica, in May 1948 and offered a one-way fare of £28.10s to the mother country, George obtained the permission of his parents, but under Barry’s guardianship. The latter was like many other ex-servicemen who could not find a suitable job at home in Jamaica.

On board, George found a job in the bakery where he earned a small amount of money for his upkeep. He thoroughly enjoyed himself on the ship. When it landed on 22 June 1948, he and Barry headed for Stafford, West Midlands. Accommodation and finding a good job which paid well were big drawbacks. When often had to do two different jobs to survive. In 1952 he decided to take a post in Coventry, but found the people their unsociable. Later that year he obtained employment in Birmingham, and he has remained there to this day.

In 1952 George found a small West Indian community consisting mainly of men in the Handsworth area. Those were the days when it was rear to see a Black woman in Birmingham. After reaching the age of 21, he married a local young lady and had three children. In the 1970s he managed a wine shop, and was one of only three Black men to have done so in the Birmingham at the time. 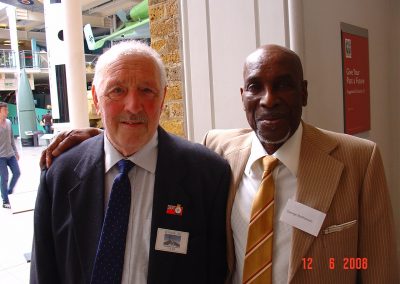