Al was born in Cuba 1925, but grew up in Jamaica. He volunteered for service in the Royal Air Force in 1944 after seeing an advertisement in the Gleaner inviting men to volunteer for service in World War 2. “It was my boyhood dream to travel and this was my opportunity”, he remembers.

In the RAF he trained as an aircraft finisher and repairer. After the war ended, he signed on for a further 2 years having been offered professional training, a free passage home on leave to Jamaica and £250.00.

He returned to England on the Empire Windrush and was stationed at a camp in Northamptonshire repairing vehicles and planes. Life there was good – “it wasn’t affected by the unrest that was happening in other RAF camps’, he remembers. He then moved to Lancashire after he was demobbed.

Al did a course in welding sciences at the Blackpool College of Art and Technology and became a skilled welder.

When the oil boom came he was in the right place at the right time, obtaining employment at oil refineries, chemical plants and power stations. His work took him to South Wales, where he stayed for more than 10 years. He was away from home for six weeks at a time and then spent a week with his family. Eventually he was able to obtain accommodation for his family. While in Wales he travelled throughout the country, visiting Swansea, Cardiff and other towns.

He and his family resettled in Blackburn, having obtained work for an engineering firm. he has lived there ever since. 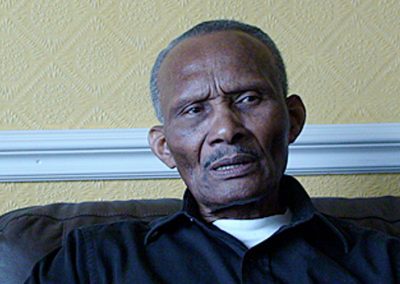