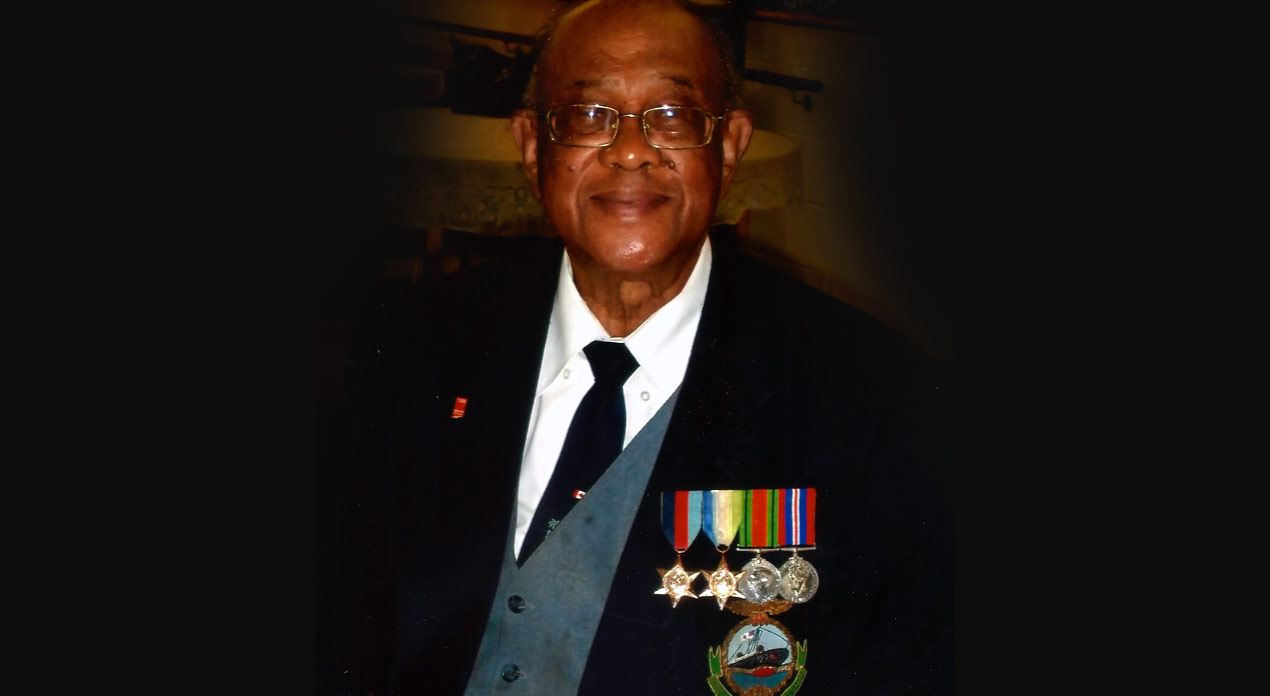 ALLAN CHARLES WILMOT (1925 – 2021) Allan volunteered first for the Royal Navy in 1941 when there was a call for volunteer servicemen from Jamaica. He saw an advertisement in the Jamaica Gleaner newspaper when he was sixteen and a half years old and the advertisement stated that the British government needed recruits for the Royal Navy. Allan applied, passed the test and was accepted. His service on HMS Hauken, in the Caribbean theatre of war, had its dangers, which came mainly from German submarines in the area. They often sank British and allied tankers as well as cargo boats. For instance, on May 25, 1942, the SS Empire Beatrice, an unescorted and unarmed cargo ship, was sunk by a torpedo fired by a German Uboat (or submarine).

At the time, Allan was among the team that rescued nine survivors from a raft and took them to Kingston, Jamaica. However, he felt his career was not progressing fast enough. At the same time, the British government began to recruit Jamaican volunteers for the Royal Air Force ground crew, and advertisements were published in the Jamaica Gleaner in late 1943. He applied to the RAF and was accepted. After WWII ended, the British were quick to demob thousands of West Indian servicemen and women. Allan was among them, and having returned to Jamaica in 1946, he felt that it was not the place in which he would settle down, and so he returned to London. Life in London in the Winter of 1947 was not pleasant, but he survived. It soon dawned on him that he could employ his talent in London’s show business, and he did so with a degree of success with The Southlanders, a male singing quartet that dominated the entertainment scene from the 1950s to the early 1970s.

The Southlanders shared the stage with most of Britain’s popular performers, including Jimmy Young, Morecambe & Wise, Vera Lynne, Andrews Sisters, Marty Wilde, Max Bygraves, Tommy Trinder, Petula Clark, Tommy Cooper, Tony Hancock, Bruce Forsyth, Helen Shapiro, David Frost, Norman Vaughan, Shirley Bassey, Tommy Steele, Cliff Richard and the Shadows, to name but a few. Also, The Southlanders’ hit records, like: I am a Mole and I live in a Hole, were produced at Abbey Road Studios by George Martin whose productions, in the 1960s, made the Beatles’ music national and international favourites. After 24 years in the business and with stiff competition from such young talented groups, he realised his days as an entertainer were numbered.

He obtained a job in the Post Office Telecommunications Department in 1974, and he retired from the service in 1990. During the two decades that followed, he played an important role in the establishment of the West Indian Ex-Services Association (now the West Indian Association of Service Personnel). During the 1980s they had obtained a permanent meeting place at 161, Clapham Manor Street, London. The aim was to ensure that their contributions and service would not be forgotten by present and future generations of British people. Their members provide social services voluntarily. He has held positions of responsibility (including being President) in the Association over the years, From 1998, he has been a member of the Memorial Gate Council, which is chaired by Baroness Flather, JP DL FRSA. The Memorial Gates, a war memorial, located at the Hyde Park Corner end of Constitution Hill in London, commemorate the armed forces of the British Empire from Africa, the Caribbean and the five regions of the Indian subcontinent including Bangladesh, India, Nepal, Pakistan and Sri Lanka that served in WWI and WWII. The memorial was officially inaugurated in 2002 by Her Royal Majesty The Queen.

He published his memoirs in 2015 and believes that the book, Now You Know’, will help others to read about the contribution he and others have made to Britain from 1941 to date. Allan continued to serve communities in the UK, and on 16 April 2019 he received the ‘Certificate of Recognition’ from the Mayor of Lambeth, Councillor Christopher Wellbelove, for his voluntary work in the borough.

Allan passed away unexpected but peacefully on 20 October 2021.